How far had the raccoon traveled and how much suffering had the animal endured along the way? These questions were posed by those who came to the aid of a raccoon captured in a box trap in Williamson County, Tennessee, in March. Such an animal might normally have been released unharmed from this trap, but for another, far less benign trap firmly affixed to the raccoon’s right front leg. Evidently, this “dog-proof” trap had been pulled from the ground after it slammed shut on the raccoon’s leg, and the animal had dragged it along—potentially for days—before ending up in the box trap. 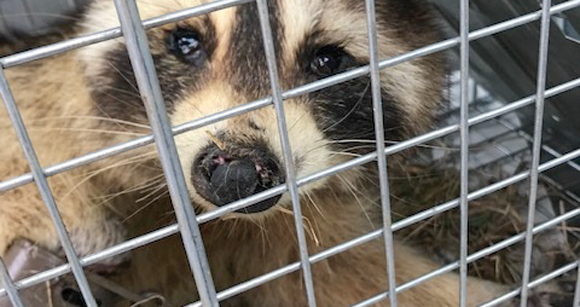 A local animal advocate immediately transported the raccoon to a veterinarian. An examination revealed that the leg had been nearly amputated by the dog-proof trap (shown below). There was also significant soft tissue damage to the animal’s head and neck, weight loss, and an overall decline in physical condition. Due to the severity of the injuries, the raccoon was euthanized.

According to the Association of Fish and Wildlife Agencies (AFWA), at least 647,400 raccoons were killed during the 2018–19 trapping season throughout the United States. (The data do not include statistics from 12 states, however, including Tennessee.) The vast majority were likely captured with conventional leghold traps, which are notoriously cruel—causing severe lacerations, broken bones, tendon and ligament injuries, and digit and limb amputations. Many of the others were likely captured in dog-proof traps, intended primarily to capture raccoons. Trapping raccoons with such devices is particularly cruel given their hypersensitive front paws. 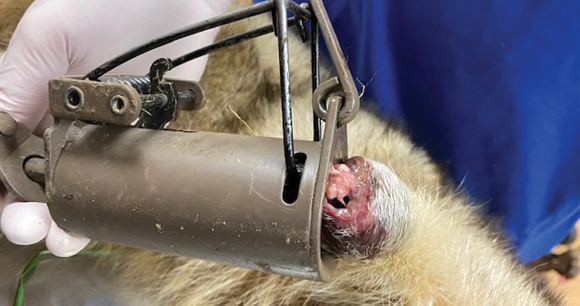 Conventional leghold traps have a plate in the middle surrounded by spring-loaded jaws. A dog-proof trap often features a metal tube. When an animal tries to retrieve bait from inside the tube, their paw inadvertently pulls up on a lever, triggering a spring-loaded bar to slam against the limb, pinning it inside the tube. While such traps reduce the risk of capturing some nontarget species (e.g., ungulates, raptors, larger mammals), any animal with a dexterous paw that is small enough to access the tube can fall victim to these traps. Indeed, images on the internet show raccoons, opossums, skunks, and foxes caught in these traps. Feral and domestic house cats are also vulnerable.

A recently published study in the journal Wildlife Monographs concluded that six of nine dog-proof traps tested met the criteria used to assess the traps’ humaneness. This criteria and the underlying testing program is intended to satisfy international “humane” trapping standards, so US, Canadian, and Russian trappers can send pelts and fur products to Europe. However, the testing involves questionable methodologies and woefully inadequate animal welfare criteria. Plus, there is no actual requirement that states mandate use of traps that satisfy the criteria.

The AFWA, trappers, and state and provincial fish and wildlife agencies may rely on self-serving criteria to assert that dog-proof traps are humane. But it is clear that the raccoon in Tennessee suffered immensely after encountering one—suffering that ended only through the compassionate actions of individuals involved in the animal’s rescue and euthanasia.