Countries from within the European Union, particularly Spain, are the main suppliers of shark fins to China, the world’s largest consumer of fins. Despite the worldwide decline in shark populations, many of these countries do not have any legal mechanisms in place to manage shark fisheries—and those that do tend to rely on weak, incomplete, or poorly enforced laws.

Additionally, many of the countries with shark finning bans do not require that whole carcasses with fins be brought to shore. Instead, a fin-to-carcass ratio, whereby the weight of the fins must not exceed a certain percentage of that of the carcasses, is enforced. Once fins are removed, however, it is nearly impossible to determine what species they were taken from, making enforcement very difficult and allowing fishermen to flout the law and mix and match the bodies and fins of various sharks. The European Union recently strengthened its 2003 shark finning ban by closing the loophole that allowed for sharks to be landed on EU vessels without their fins, as long as they met the fin-to-carcass ratio. Now, no sharks can be landed on board any EU vessel without their fins.

The United Nations Food and Agriculture Organization (FAO) developed the International Plan of Action for the Conservation and Management of Sharks (IPOA-Sharks) in 1999. The Plan, in which participation is voluntary, calls on all fishing nations to assess the status and conservation needs of sharks and directs countries whose fisheries catch sharks to prepare and implement a National Shark Plan (NPOA). Implementation of the IPOA-Sharks has been extremely slow. Although the FAO requested that all Shark Plans be submitted by 2001, less than half of the shark-fishing nations have adopted an NPOA.

In 2010, a Shark Memorandum of Understanding (MOU) was adopted by parties to the United Nations Convention on the Conservation of Migratory Species of Wild Animals (CMS) to improve the conservation status of migratory sharks listed in Appendices I and II of CMS. The agreement prohibits the practice of shark finning and the landing of unattached fins. The Shark MOU applies to seven shark species—basking, great white, whale, shortfin mako, longfin mako, porbeagle, and the northern hemisphere populations of spiny dogfish. As of May 1, 2014, CMS had 120 Parties. 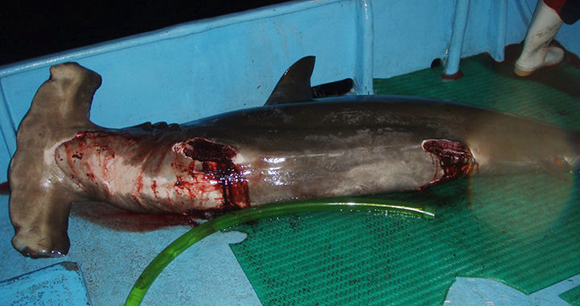 A number of countries, including Argentina, Costa Rica, Chile, Colombia, Ecuador, El Salvador, Panama, and the United States require that sharks be landed with their fins naturally attached to their bodies to ensure that finning does not occur. Recognizing the need for even stronger protections, some nations have become true champions for sharks; since 2009, an increasing number of countries such as Palau, Honduras and the Maldives have banned shark finning as well as established shark sanctuaries that ban all shark fishing within their territorial waters. Please click here to learn more about the International shark finning bans and policies.

Lastly, many hotels, airlines, and companies have taken conservation into their own hands by establishing company policies that ban the shipment, sale, or promotion of shark fin products. Please click here to learn more.