Cattle are raised to produce beef, veal, and dairy products. Learn more about dairy cows, calves raised for veal, cows raised for meat, and how they are raised.

According to the US Department of Agriculture, in 2021 the average number of US dairy cows involved in milk production at any given time was 9.45 million. Although all cows are grazing animals, inclined to live together in herds and range grasslands, most dairy cows today live within concentrated animal feeding operations (CAFOs)—a.k.a. factory farms—in barren dry lots or “freestall” barns where they have little or no outside access or opportunity for exercise.

Today’s dairy cow has been genetically selected to produce up to 12 times the amount of milk needed to feed her calf. Producers have maximized productivity, but the cows unquestionably suffer poor welfare as a result. Producing such vast quantities of milk in one lactation cycle is so taxing and stressful that dairy cows are typically kept only for three or four years (or three cycles of pregnancy, birth, and lactation) before they are slaughtered.

In traditional pastoral conditions, before industrial farming, cows could live up to 25 years, but today most cows suffer from lameness and other painful conditions that are consequences of poor-welfare breeding practices in industrial systems.

In order for a dairy cow to produce milk, she must give birth to a calf. While most female calves are kept with the herd to be used for milk once they mature, male calves typically are separated out to supply the veal or beef industry. Right after a dairy cow gives birth to her calf, farmers take the calf away from the mother. In the case of male calves used for veal, until recently, most were confined in small, solitary stalls for 16 to 18 weeks until slaughter. In 2017, the veal industry completed its voluntary phase-out of the use of “veal crates,” although it is possible that some producers continue to confine their animals in this manner. 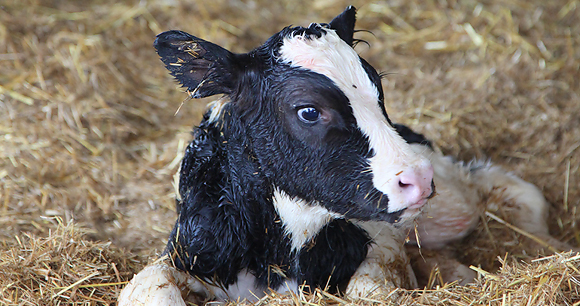 The approximately 391,300 calves killed for veal in the United States each year have no interaction with their mothers and have more limited physical activity than a typical calf raised for beef. Unlike calves raised for beef, most veal calves are housed indoors. Some veal calves are fed only a compromised liquid diet, and are purposefully kept anemic and weak in order to yield tender, pale meat. Because veal calves are removed from their mothers and slaughtered at a very young age, some higher-welfare certification programs do not certify any veal. From the perspective of those who consider animal welfare an important consideration when farming, “high-welfare” veal is simply not possible to produce.

Nearly 34 million cattle were raised for meat in the United States in 2021, according to the USDA.

Cattle raised for meat are usually on range for their first six to seven months of life. This initial ability to walk around, socialize, and eat the food most readily digestible for cows means that these animals start off with better lives than many other farm animals, such as pigs, chickens, and dairy cows. 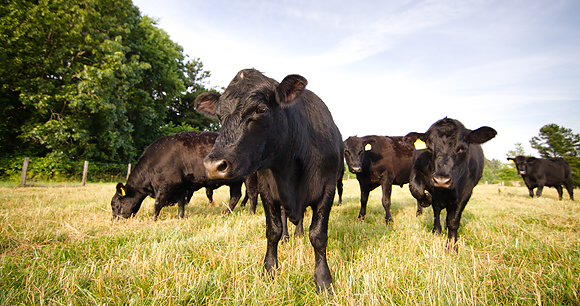 However, conventional beef cattle systems also incorporate painful mutilations like castration, dehorning and disbudding, and branding, all without any medical relief for the pain. Even tail docking, typically associated primarily with dairy farms, may be performed when cattle raised for meat spend their early months not on the range but in cramped indoor barns.

Whether cattle raised for meat start their lives on the range or inside a barn, however, they end up on a feedlot for their last six months before being sent to slaughter. At the feedlot, cattle are confined together in dirty conditions, standing on unnatural slatted concrete floors or in muddy “dry lots” free of vegetation. They are fattened on grain, which causes internal stress and disease because cattle stomachs have evolved to digest forage (i.e., grasses), but are poorly adapted to digest the grains and concentrates (e.g., corn) that producers use to fatten them more quickly.

High-welfare, pasture-based farms allow cattle raised for meat to graze and stay in their bonded groups throughout their lives. They spend most of their time outdoors and are allowed to express natural behaviors and eat the food they prefer the way they adapted to eating it, by grazing.