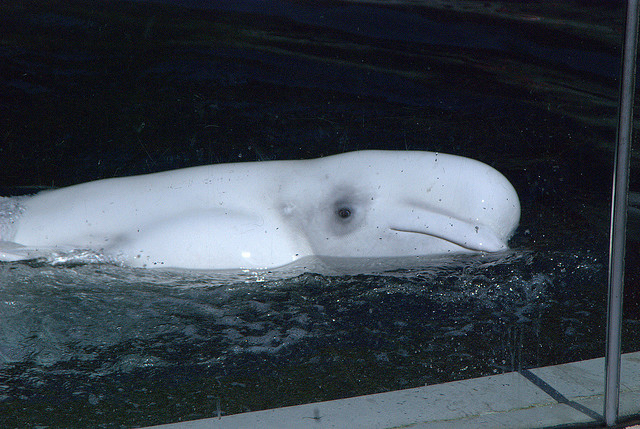 Washington, D.C.—The Animal Welfare Institute (AWI), Whale & Dolphin Conservation (WDC), Cetacean Society International (CSI), and Earth Island Institute (EII) today filed their joint response to Georgia Aquarium, Inc., in the case of Georgia Aquarium, Inc. v. Pritzker—a lawsuit Georgia Aquarium filed to overturn a decision by the National Marine Fisheries Service (NMFS) to deny the Aquarium’s application for a permit to import 18 wild-caught beluga whales from Russia’s Sea of Okhotsk for purposes of public display. Georgia Aquarium’s “motion on the merits” seeks to have a federal judge order NMFS to not only overturn the decision but also order the agency to grant the permit.

In April 2014, the court granted a request by the animal protection and whale conservation groups to “intervene” in the case as co-defendants in support of the government’s denial of the permit application.

“We fully support NMFS’s decision and find Georgia Aquarium’s arguments to overturn it to be exploitative and completely counter to the Aquarium’s self-portrayal as a conservation organization,” stated AWI’s marine mammal scientist, Dr. Naomi Rose. “It is shocking how Georgia Aquarium ignores good science and basic conservation principles in its quest to increase the number of belugas in its breeding program.”

If the import occurs, the belugas would be distributed between Georgia Aquarium, SeaWorld Entertainment, Inc., and Shedd Aquarium.

In its response, the groups argue why NMFS was correct in determining that Georgia Aquarium:

“Live capture is one of the most serious threats facing this likely depleted stock of beluga whales in the Sea of Okhotsk,” stated Courtney Vail, campaigns and programs manager for WDC. “Issuance of a permit would not only undermine the statutory requirements of the MMPA, it would signal U.S. endorsement of an unsustainable and expanding international trade in live-captured beluga whales.”

CSI’s William Rossiter added that “approving this import permit would open the floodgates rightly closed since 1993, allowing many wild caught cetacean species to be imported from nations with laws and regulations that fall far short of U.S. standards.”

“The dolphin and whale captivity industry, including SeaWorld Entertainment, Inc., have repeatedly claimed to the American public that they no longer catch wild cetaceans to put into small aquarium tanks,” stated Mark J. Palmer, associate director of Earth Island Institute’s International Marine Mammal Project. “Clearly, the industry has tried to mislead the public. This lawsuit is all about bringing 18 wild beluga whales from Russia into the United States to put them in inadequate tanks for public display. Forty-eight percent of the beluga whales brought into captivity have died in U.S. aquariums.”

The same month that the animal protection and whale conservation groups intervened in the lawsuit, they also submitted a petition to NMFS to protect this stock of beluga whales in Russia by designating it as “depleted” under the Marine Mammal Protection Act (MMPA). It is illegal under the MMPA to import marine mammals or their parts from depleted stocks.

For more information on the case, visit https://awionline.org/cases/protection-beluga-whales.

The Atlanta law firm of Stack & Associates, P.C. filed the response on behalf of the groups.

About the Animal Welfare Institute
The Animal Welfare Institute (AWI) is a non-profit charitable organization founded in 1951 and dedicated to reducing animal suffering caused by people. AWI engages policymakers, scientists, industry, and the public to achieve better treatment of animals everywhere—in the laboratory, on the farm, in commerce, at home, and in the wild. For more information on AWI, visit www.awionline.org.

About Whale & Dolphin Conservation
Whale and Dolphin Conservation (WDC) is an international charity dedicated to the conservation and welfare of whales, dolphins and porpoises worldwide. Established in 1987 with offices in the United States, United Kingdom, Argentina, Germany, and Australia, WDC works to reduce and ultimately eliminate the continuing threats to cetaceans and their habitats, while striving to raise awareness of these remarkable animals and the need to protect them in their natural environment. For more information on WDC, visit www.whales.org.

About Cetacean Society International
2015 is CSI’s 41st year of non-profit advocacy to: stop the killing, capture, and display of cetaceans; encourage human activities that enhance public awareness and stewardship of cetaceans and our marine environment; and collaborate with stakeholders to reduce anthropogenic threats. For more information on CSI, visit www.csiwhalesalive.org