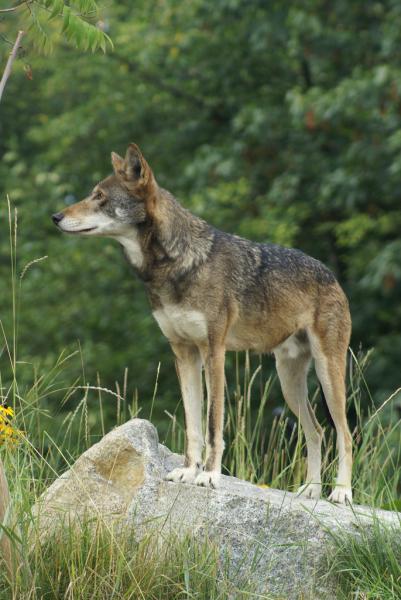 USFWS Asked How Many Wolves Shot Since Rule

CHAPEL HILL, N.C.—Concerned groups asked a state court to stop spotlight hunting of coyotes at night in North Carolina—including the area inhabited by the world’s only wild population of about 100 red wolves—after one or more of the wolves was killed. The Southern Environmental Law Center filed the motion for preliminary injunction (read Memo in Support of Motion for Preliminary Injunction here) and a request for expedited hearing in Wake County Superior Court on behalf of the Animal Welfare Institute, Defenders of Wildlife, and the Red Wolf Coalition.

The law center also today sent a notice letter to the North Carolina Wildlife Resources Commission that the commission is in violation of the federal Endangered Species Act by allowing spotlight hunting of coyotes and the groups will file a federal enforcement action unless steps are taken to protect the wolves.

“We hope that the commission will take necessary measures to avoid killing of red wolves,” said Derb Carter, a senior attorney at the Southern Environmental Law Center who represents the groups. “The killing of an endangered red wolf just over a month since the commission allowed spotlight hunting of coyotes at night is a clear signal that the rule is a danger to wild red wolves. We’ve asked the U.S. Fish and Wildlife Service to confirm reports that additional wolves have been shot since the rule went into effect.”

At least one of the few remaining wild red wolves (Canis rufus) has been killed since the rule went into effect. On September 4, a red wolf was found dead by gunshot within the eastern North Carolina area designated for red wolf recovery. Red wolves and coyotes are similar in size, coats, and coloring so red wolves are frequently mistaken for coyotes, even in daylight. Gunshot deaths are a significant threat to red wolf recovery and a leading cause of red wolf mortality.

“With fewer than 100 red wolves in the wild, we cannot afford to lose a single one to accidental shooting,” said Jason Rylander, senior staff attorney at Defenders of Wildlife. “Spotlight hunting of coyotes is a new and unnecessary threat to the conservation of red wolves.”

By allowing night hunting of coyotes, the commission is committing an unlawful take (i.e., harass, harm, hunt, or kill) of the red wolf. The U.S. Fish and Wildlife Service stated in its public comments that the Commission’s rule “amendments to allow night hunting have the potential to result in unauthorized take of red wolves.”

“It is the Commission’s duty to follow the law and protect wildlife in the state. Daytime coyote hunting has, for years, hindered wolf recovery,” said AWI legal associate Tara Zuardo. “The addition of night hunting will result in more red wolf deaths and further damage the recovery effort.”

North Carolina is home to the world’s only wild population of red wolves. Red wolves bred in captivity were reintroduced on a North Carolina peninsula within their native range in the late 1980’s after red wolves were declared extinct in the wild. Once common throughout the Southeast, intensive predator control programs and loss of habitat eliminated wild red wolf populations.

About the Animal Welfare Institute
The Animal Welfare Institute (www.awionline.org) is a non-profit charitable organization founded in 1951 and dedicated to reducing animal suffering caused by people.  AWI engages policymakers, scientists, industry, and the public to achieve better treatment of animals everywhere—in the laboratory, on the farm, in commerce, at home, and in the wild.

About Southern Environmental Law Center
The Southern Environmental Law Center,www.SouthernEnvironment.org, is a regional nonprofit using the power of the law to protect the health and environment of the Southeast (Virginia, Tennessee, North and South Carolina, Georgia, and Alabama). Founded in 1986, SELC's team of more than 50 legal and policy experts represent more than 100 partner groups on issues of climate change and energy, air and water quality, forests, the coast and wetlands, transportation, and land use.