Washington, DC—Documents obtained by the Washington, DC-based Animal Welfare Institute (AWI) reveal that a Norwegian whaling company, Lofothval, has sought permission to ship up to 22,000 pounds (10 metric tons) of whale meat to Iceland. The export request comes barely a month after the United States government raised concerns about Norway’s escalating whaling and trade in whale products during the 65th meeting of the International Whaling Commission (IWC). 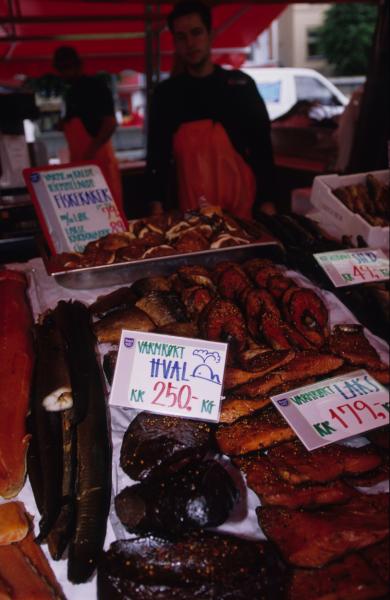 Washington, DC—Documents obtained by the Washington, DC-based Animal Welfare Institute (AWI) reveal that a Norwegian whaling company, Lofothval, has sought permission to ship up to 22,000 pounds (10 metric tons) of whale meat to Iceland. The export request comes barely a month after the United States government raised concerns about Norway’s escalating whaling and trade in whale products during the 65th meeting of the International Whaling Commission (IWC).

Norwegian whalers killed 731 minke whales in 2014, more than in any year since the country resumed commercial whaling in 1993, and the hunt yielded a record 871 metric tons of whale meat. However, domestic sales of whale meat have struggled in recent years, as government- and industry-subsidized whale meat marketing programs look to increase local demand. Norwegian whalers therefore endorse increased exports, claiming that international trade in whale meat is needed to help ensure the survival of the industry.

"Norway has systematically increased its cruel slaughter of whales in recent years,” said Susan Millward, AWI executive director. "The United States recently imposed diplomatic measures against Iceland for its whaling and trade in whale products, and we believe that these same penalties should be imposed on Norway. We call on the United States and other governments to act decisively to bring international trade in whale products to an immediate halt.”

The Lofothval request to send minke whale meat to Iceland comes on the heels of a massive 2,100 ton shipment of fin whale meat from Iceland to Japan. The Icelandic shipment was orchestrated by Kristján Loftsson, managing director of the Hvalur fin whaling company. Loftsson, who is also chair of the Icelandic seafood giant HB Grandi, is a shareholder in the Lofothval company.

“Consumption of whale meat in Norway has declined as concern for the welfare of whales killed by Norwegian whalers has increased,” said Siri Martinsen, director of NOAH, a Norway-based animal rights organization. “Poll results reveal that 42 percent of Norwegians oppose whaling if some whales suffer at the time of death while, sadly, 31 percent support whaling regardless of the cruelty. We would welcome trade sanctions against Norwegian companies engaged in whaling imposed by the US government.”

About the Animal Welfare Institute
The Animal Welfare Institute (www.awionline.org) is a non-profit charitable organization founded in 1951 and dedicated to reducing animal suffering caused by people. AWI engages policymakers, scientists, industry, and the public to achieve better treatment of animals everywhere-- in the laboratory, on the farm, in commerce, at home, and in the wild. For more information, visit www.awionline.org.

About NOAH
Founded in 1989 NOAH has over 3,000 members and active supporters committed to promoting NOAH’s message of respect for the lives of animals. NOAH works in all areas of animal rights, through changing attitudes, influencing politicians and industry parties, initiating public debate and documenting animal abuse. For more information, visit www.dyrsrettigheter.no.

Editor’s Notes:
1. The International Whaling Commission moratorium on commercial whaling was agreed to in 1982, and took effect as of 1986. Norway lodged a legal objection to that decision, and in 1993 resumed commercial whaling. The IWC passed a resolution in 2001 calling on Norway to halt all whaling activities. Norway’s self-allocated quotas for whales are not approved by the IWC.

3. In 1994, Norway was certified by the United States under the Pelly Amendment to the Fishermen’s Protective Act for undermining the International Convention for the Regulation of Whaling (ICRW),the treaty under which the IWC’s whaling moratorium was approved. Norwaywas not subject to sanctions, including potential trade sanctions, at the time based on an agreement with the United States—one of the requirements of whichwas that Norway would not engage in international trade in whale products.