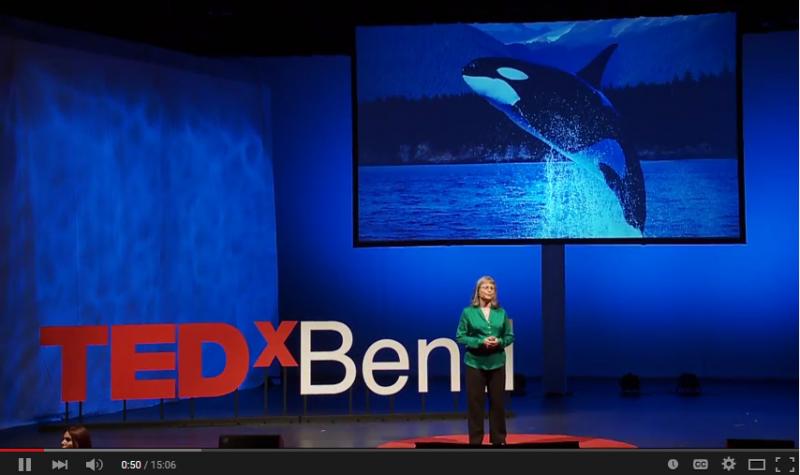 In her presentation, Dr. Rose discusses how orcas in the wild share intricate family bonds, with members serving distinct roles to help one another survive, reproduce, and flourish. In contrast, Dr. Rose explains, orcas in captivity—sometimes held alone or with orcas from different populations—are denied natural family life.

In discussing the separation of family members at different marine theme parks, Dr. Rose says, “We all have family. How can it be morally right to do to others—even when those ‘others’ aren’t human—what we would consider devastating if it happened to us? This comparison is not anthropomorphism. It’s empathy.”

Dr. Rose’s TEDx Talk is highly relevant, given the recent pushback that popular marine theme park SeaWorld has faced from a growing number of consumers and businesses that believe it is no longer acceptable to hold whales and dolphins in captivity for the purpose of entertainment. Despite multiple lawsuits, business partnership cancellations, dipping stock, and plummeting attendance, the park continues to keep orcas in captivity for profit and refuses to acknowledge the public’s concern for the well-being of the animals.

However, with only 56 orcas in captivity in the world, Dr. Rose believes that the issue of their captive display can be solved. She encourages the public to write to marine theme parks and express support for the retirement of captive orcas to sanctuaries.

“When you’re considering where to go on family trips, think about whether you want to spend your money at a marine theme park, now that you know what you know about these whales’ remarkable families,” says Dr. Rose. “Consumer choice is a powerful force for change—after Blackfish aired on CNN in 2013, SeaWorld’s annual attendance dropped by a million visitors and its stock dropped almost 50 percent. Your choices make a difference.”

For more information on cetaceans in captivity, visit http://awionline.org/content/confinement-marine-life.

About the Animal Welfare Institute
The Animal Welfare Institute is a nonprofit charitable organization founded in 1951 dedicated to reducing animal suffering caused by people. AWI advocates for responsibly watching cetaceans in the wild as a means to experience the thrill of seeing these creatures in action. AWI only supports cetacean captivity in exceptional circumstances, such as when an animal has live stranded and has been deemed, by responsible experts, unable to be safely returned to the wild. In these circumstances, AWI supports initiatives to ensure that the animal is truly provided an opportunity to be an ambassador for the species, is afforded proper respect and a decent life and, above all, is not trained to perform unnatural tricks or participate in shows. For more information about AWI, visit www.awionline.org.