The world's fisheries and aquatic ecosystems are showing the strain of global trends toward greater production and more destructive fishing practices. Technological advances in the past few decades have increased efficiency—enabling the world's fishing fleet to maximize its catch and process it at sea. Unfortunately, the efficiency focus has been on increasing speed and volume—not on reducing collateral mortality of non-target marine organisms and destruction of marine habitats.

According to the Food and Agriculture Organization of the United Nations, roughly 32% of world fish stocks are overexploited, depleted or recovering and in urgent need of rebuilding. Commercial fleets employ huge nets and other non-discriminate methods that sweep up unwanted flora and fauna along with the desired catch, obliterating seabed habitat in the process. Millions of non-target animals also die every year as bycatch—hauled up and thrown overboard, dead or mortally wounded. Air-breathing marine mammals and sea turtles are particularly vulnerable because they can quickly drown when trapped in fishing nets. Animals who manage to break free may still end up dragging a portion of the net with them, causing life-threatening injuries, interfering with behaviors necessary for survival, and making them vulnerable to predators.

Some of the most destructive fishing methods include the use of driftnets, longlines, trawls, explosives, and purse seines. Practices such as shark finning, where the fins of sharks are sliced off and the body of the shark discarded, are particularly destructive, as well, not to mention horrifically cruel.

Fisherman in Southeast Asia, Africa and the Aegean Sea practice this method, also called explosive or dynamite fishing, to catch fish even though it is illegal in most places. 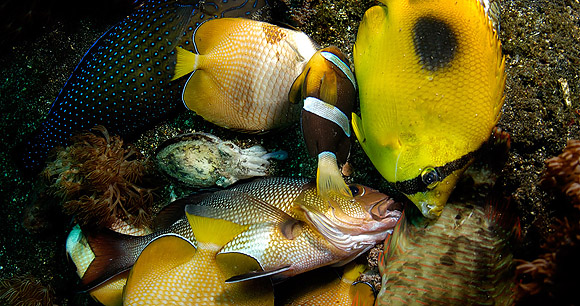 Fishermen who use this method set explosives, usually homemade, in the water to stun entire schools of fish at once. Shockwaves from these explosions can be very hazardous to the surrounding environment, especially to sensitive coral reefs.

Driftnets are gillnets that are allowed to drift near the surface of the water. Fish are trapped as nets slide behind their gill covers. Driftnets are used to capture many types of fish including tuna, swordfish and salmon. These nets were traditionally small in size, biodegradable and attached to small vessels. Present day driftnets, however, are made of nylon and can measure up to 50km in length. The tops of driftnets are equipped with floats, and weights are attached to the bottoms—creating a vertical wall in the water. 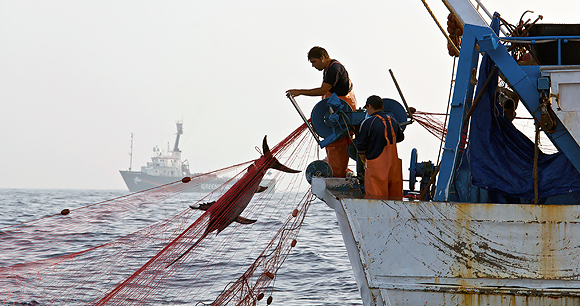 Being non-selective, vast numbers of non-target animals perish in driftnets as bycatch. In some cases, several days pass before the driftnets are retrieved—too late for air breathing mammals caught in the nets to be freed. Unintended victims of driftnets include whales, dolphins, sea turtles, seals, sea lions and seabirds. Some of the victims are endangered species.

Driftnets are particularly dangerous when they become “ghost nets” that have been abandoned or lost by fisherman. Since the nets are made out of highly resistant nylon, they can linger in the environment, entangling marine life for months.

In 2001 the National Oceanographic and Atmospheric Agency (NOAA), created the Pacific Leatherback Conservation Area, prohibiting driftnet fishing for a part of the year in the waters off Monterey, California to the mid-Oregon coast. This decision was a much needed lifeline for leatherback sea turtles, who are still recovering from decades of decline, as well as other marine species. Because of their destructive power, driftnets have also been banned in the European Union since 2002 and in the Baltic Sea. Unfortunately, despite the EU ban, French and Italian fisherman continue to illegally use driftnets to catch tuna and swordfish in the Mediterranean Sea, encouraged by the extremely lax enforcement of the ban.

Gillnet fisheries are also responsible for the decline of the most endangered porpoise in the world, the vaquita, a harbor porpoise endemic to the Gulf of California—currently listed as endangered under the US Endangered Species Act (ESA) and Critically Endangered by the World Conservation Union's (IUCN) Red List of Threatened Species.

Longlining is a fishing technique which involves placing thousands of baited hooks on a fishing line that can stretch for several miles.

This technique gained popularity in the 1980's, with the growing demand for highly valued fish such as tuna, mackerel, and swordfish. Unfortunately, these fish are not the only creatures who are caught and killed on these longlines. The bait also entices marine mammals, sea turtles, seabirds, sharks and non-target fish species. 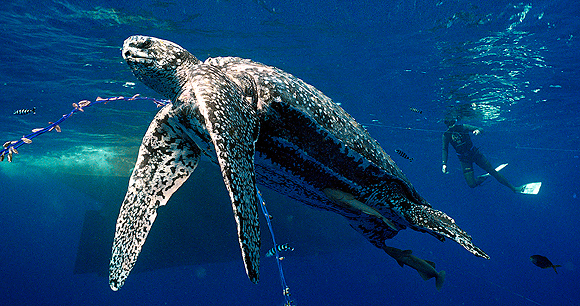 Gear modifications and temporary prohibitions can reduce the numbers of bycatch taken by the longlining industry.

For example in 2004, in an effort to protect non-target animals from being caught by longlines, the Pacific Fishery Management Council (PFMC) prohibited the use of longlines out to 200-miles off California, Oregon and Washington. The decision by the PFMC helped protect countless species from the damaging longlines. The use of circle hooks as opposed to the traditional J-hooks has also increased the number of turtles and other marine animals that are successfully freed from longlines.

A purse seine, which is attached to a boat, is a weighted net that hangs vertically in the water with floats on the top and rings on the bottom with a rope running through them. When a fishing vessel encircles a school of fish, the rope is tightened preventing the fish from escaping. This fishing method is commonly used to capture fish species that travel in schools close to the surface such as certain species of tuna, sardines, herring and salmon. 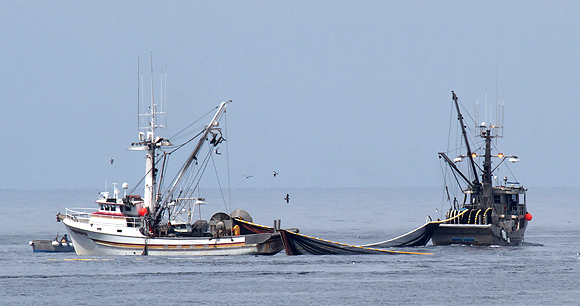 In the 1950's, fisherman in the eastern tropical Pacific Ocean discovered that large yellowfin tuna congregate under pods of pantropical spotted, spinner, and common dolphins. Fishermen began to seek out dolphins to guide them towards the tuna. After herding the dolphins into a tight group using speed boats, they surround them with a purse seine net, which encloses the dolphins and the tuna below when pulled tight. This chase, which can take up to two hours, traumatizes and confuses the dolphins so that even if they are given the opportunity to escape, they are often unable to do so. For those who survive, there is no way of knowing how this disturbance affects them. The dolphins are hauled aboard with the tuna and are usually discarded as bycatch. Survivors may endure this unpleasant capture and release many times throughout their lives.

The tuna industry in the Eastern Tropical Pacific alone is believed responsible for over seven million dolphin deaths since the advent of purse seine fishing there in 1959. Attempts by the US government to ban import of tuna caught via purse seines that harm dolphins, and alternately to create a robust “dolphin safe” tuna label so consumers could avoid tuna caught using such methods, have been challenged as “restrictions on free trade” through the World Trade Organization and other international trade forums.

Trawling is another fishing technique that results in high numbers of bycatch. The two trawling methods are pelagic and bottom (“dimersal”) trawling. Bottom trawling, the more environmentally destructive of the two, involves a fishing vessel which drags a funnel shaped weighted net, equipped with a mechanism to disturb the seabed, along the sea floor to sweep up everything in its path. This method is indiscriminate, uncontrollable in the numbers of organisms netted and is extremely destructive to ancient and fragile seabed communities. 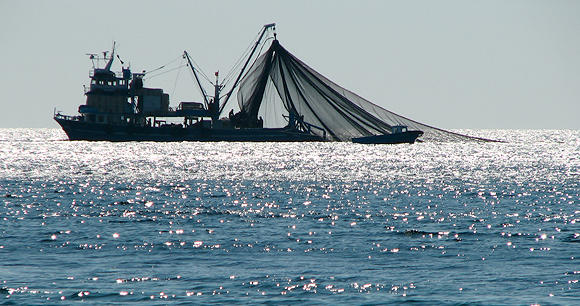 Deepwater coral communities and sea mounts are being devastated by bottom trawls, an activity which has been compared to the clear-cutting of rainforests. Corals are among the oldest living animals on the planet and are slow growing organisms; some species only growing a millimeter every year. When coral communities are damaged they are lost for generations. In addition, bottom trawls may be extinguishing endemic communities of sponges, crustaceans, fish, and other species that we have yet to even discover.

Shrimp trawls in particular are notorious for their high level of bycatch, catching animals ranging from fish to endangered sea turtles. The unwanted dying or already dead bycatch is commonly discarded back into the water. Gear modifications such as Bycatch Reduction Devices (BRDs) and Turtle Excluder Devices (TEDs) greatly reduce unintended bycatch by allowing animals an escape. Unfortunately, laws and their enforcement mandating these devices vary greatly across nations. 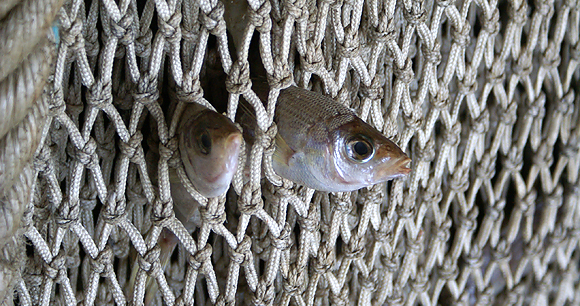 Pelagic (or mid-water) trawls are designed to catch large schools of fish such as tuna, sea bass and anchovies by dragging a net higher in the water column. By doing this however, they are the cause of a high level of cetacean bycatch. Because the fish species targeted by these trawls are also important prey sources for dolphins, dolphins are the most common bycatch victims of this fishing method.